WannaCry: Everything you need to know about the global ransomware attack 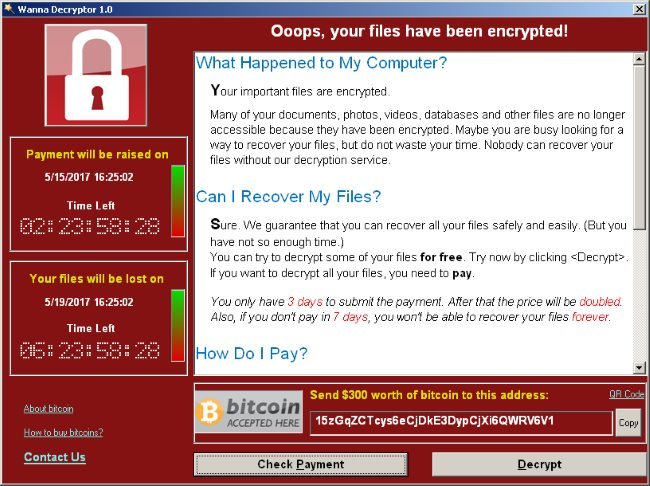 WannaCry is the most severe malware attack so far in 2017, and it’s still spreading all around the globe.

This malware attack began affecting the globe late last week, and security researchers estimated that in more than 150 countries, nearly 57,000 computers were infected by the end of the day on Friday. While the spread of this frightening ransomware was slowed on Saturday, it was hardly stopped. Around 200,000 systems around the world are believed to have been infected as of Monday morning.

This malware is a frightening type of Trojan Virus called “ransomware”. The virus in effect holds the infected computer as hostage, and in order to regain access to the files in the computer, the victim is demanded to pay a ransom.

What does WannaCry do?

WannaCry works by encrypting most files on a user’s computer. Then, in order for the files to be decrypted, the victim is demanded to pay a ransom worth $300 in bitcoins at the time of infection. If the user doesn’t pay within three days, the amount doubles at $600. If failed to pay after seven days, WannaCry will delete the encrypted files and all data will be lost.

How was WannaCry created?

NSA discovered the “EternalBlue” exploit that would be used by the WannaCry trojan later on, and then for keeping it to use for its own intelligence gathering purposes.

How can I protect myself from WannaCry?

You should install all the available security updates as soon as possible.

Make sure you have a backup strategy for all your devices. IT Black Spot can provide, setup and monitor both onsite or off site backup solutions plus a managed service solution to give you complete peace of mind.

What can I do if my computer is infected with WannaCry?

Unfortunately, there’s no available fix yet for WannaCry at this moment. Cybersecurity experts and antivirus companies are working hard to look for ways to decrypt files on infected computers, but no third-party decryption are available this time. Hopefully, the affected users have backups of their files because the only option is to pay for the ransom.